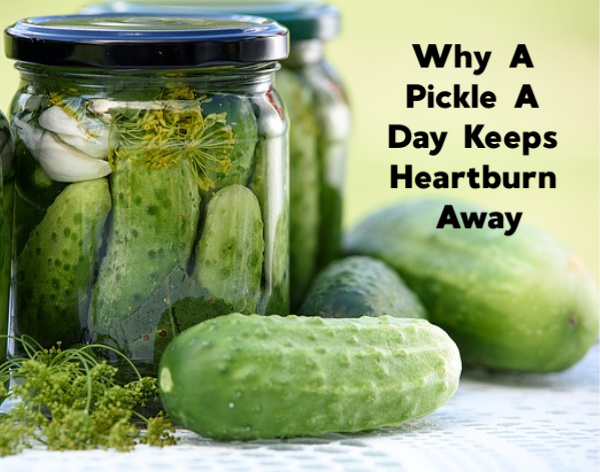 If  you’ve ever had really bad heart burn there is no need for me to explain the discomfort and in some case straight out pain. For me it would strike in the middle of the night and I’d find myself stumbling around half asleep, trying not to wake anyone while I dug around for the Rolaids. Where are they when you really need them? Never where they are suppose to be! And then, finally you find them but they only offer short-term relief or worse – there is only one left!

One night, years ago, I found myself awake at 2 am and everything changed! Some man was on the T.V. talking about the validity of many of the wives tales in relation to ailments and one remedy suggested for heartburn was pickles or a tablespoon of pickle juice. Pickles? Yes, that’s what I thought too! This got me to thinking about my grand mother who had come to Canada as a pioneer and spent a life time making pickles and espousing the medicinal benefits. I don’t recall her mentioning heartburn specifically but there was a language barrier; I do however, remember her saying, “Eat pickles – you no get sick.” Of course pickles means vinegar and vinegar fights bacteria so there is some science behind her theory but as a remedy for heartburn? Lets face it, the last thing most people suffering from heartburn want is vinegar!

He went on to give further explanation and I have to admit, it seemed to make sense. He compared a stomach to a pot of boiling water. If you let the water boil off you are left with the last remaining bit of water splattering and spiting upwards and he suggested that’s what happens in the stomach when there aren’t enough acids, the little that is left at the bottom splatters upwards and causes pain. Adding acids from a pickle or a bit of pickle juice brings the levels up and the splattering stops, much like it would if you added more water to the pot. It seemed logical.  Well not more than a few days later my heart burn started again and I figured, what the heck, it’s a pickle right? I decided to really go out on a limb and eat two for good measure. Within 5 minutes my heart burn was completely gone! From then on I’ve made a greater effort to put pickles out on the dinner table regularly and instead of avoiding pickle for an evening snack for fear of heartburn later in the night,  I embraced them and now heartburn is a thing of the past.  It may not work for everyone but it works great for me so thought I’d pass this tip along.

Related Resources
It’s always a good idea to talk things over with your doctor when it comes to your health. Livingstrong.com The Acid Reflux Center states, ‘This may not be an effective treatment and educating yourself may help you decide if it is right for you.’ Medical Daily Pickle Juice: 4 Health Benefits Of Drinking The Green Juice suggests their some validity to the claim that pickle juice is an effective remedy stating ‘This might sound like it would cause the exact opposite effect, since vinegar triggers heartburn for some, but the vinegar in pickle juice actually helps some people soothe heartburn, according to Yahoo Shine.